Posted on November 15, 2019 by catchingcrawfish 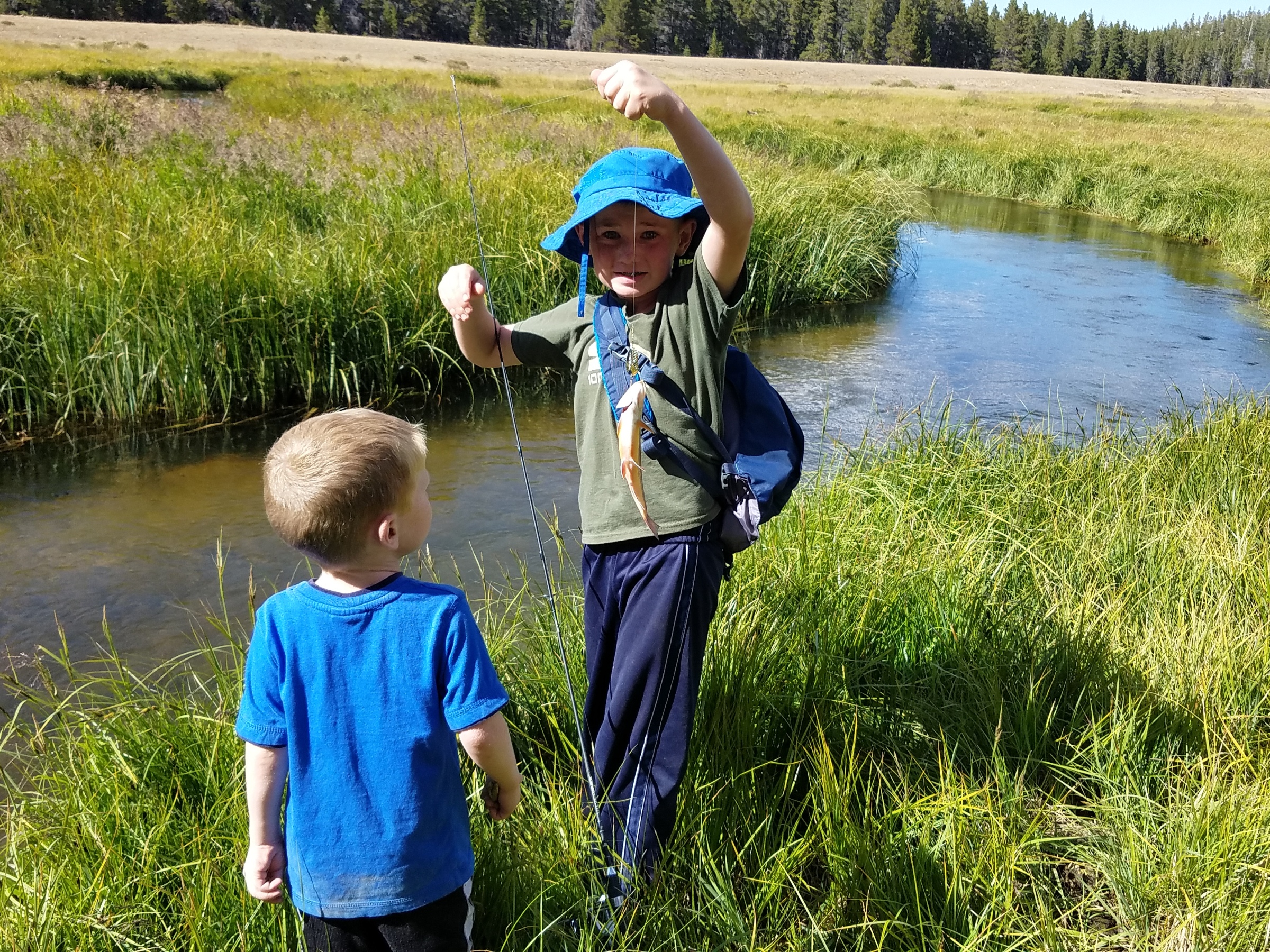 When my husband proposed we take our boys on a backpacking trip over Labor Day weekend, I was all in. Our kids are experienced hikers and campers, and we had done a couple little backpacking trips earlier that summer. Over this last year we discovered that we have reached a magical stage in our boys’ lives where we are no longer encumbered with diapers, baby carriers, nursing, or other baby needs (for the first time in 11 years!! Woohoo!), and we are loving it. A backpacking trip? Why not?? The plan was three miles in, three miles out, a couple days in between to play.

My husband grew up backpacking, canoeing, and exploring the Wind Rivers in Wyoming with his dad, so that’s where we planned to go. Maps stretched over our table like a tablecloth, we finally decided on Shoshone Lake near Lander. A couple weeks later we packed up our car, picked up grandpa, and we were off!

We arrived at (almost) the trail head around 1am, and after a rather hurried night sleep (and patching up a flat tire) we loaded back up in the car. My husband and father-in-law had fond memories of hiking near Shoshone Lake 25 years ago and had vague memories of driving up a bumpy road, parking the car when it narrowed into a trail, and hiking the remainder to a lookout over the lake. After being thrown around the rocks for ten minutes, we realized that 25 years had done a number on what they remembered as a rather disastrous but passable road. With ten miles left to go, we parked the car, slipped into our backpacks and, with smiling, cheery faces, started our ascent into the mountains. What’s seven more miles than we had planned?

Appearently a lot to someone who has only been on this planet for four short years. Even with the essential responsibility of carrying the Snickers bars in his super-awesome, camo fanny-pack, Ty was miserable. Mis-er-a-ble! By four steep miles in he had asked to be carried no less than 143 times. Of course that would have been impossible because between the steep incline and my 40 pound pack, I also thought I might die.

At 6:00 that evening we summited our mountain, and down in the valley we could see the lake. It was incredible! In an instant all of our aches and pains seemed to melt away. Ok, that’s definitely a gross exaggeration. Everything hurt. Period. Absolutely nothing was doing any sort of melting as the temperature had suddenly plunged to what felt like thirty degrees and the wind just about swept us back down the mountain. But now that we could finally see our destination, everyone had a renewed determination. And that’s all we needed. Two more miles (finally downhill!) to go, and we would be to the lake!

The sun was just going down as we found a spot to camp. The lake was beautiful, the stars were numbering in the trillions, and after ten exhausting miles we had all made it alive!

We spent the next two days at and around the lake fishing, kayaking in an inflatable kayak grandpa had brought, exploring the rivers all around, and relaxing. By the next morning all of the kids (Ty included) had forgotten all about the arduous journey we had taken to get there.

Ten miles in, ten miles exploring over two days, then ten miles out. The trip out always proves to be quicker. Though it was no less difficult, our packs were lighter (or at least the boys’ — we ate all of Ty’s snickers in addition to the food the other boys had carried) and the prospect of getting to rest in the car carried us forward. Nine hours after we started, we finally spotted the car. Now that was a welcome sight!

For weeks after we returned home, all the boys could talk about was Shoshone Lake, the fish they caught, the treasures they found, and how THEY had hiked ten miles in, ten miles out, and ten miles in between. Now the talk is how they might be able to do 70 miles across the entire Wind Rivers next summer…what???

In our family we tease that there are three types of fun. Type 1: Disneyland. Pure pleasure. Type 2: Experiencing fun through someone else’s eyes. I.E. Watching your kids at the park. Type 3: Torture that somehow ends up being satisfying in a, “That was the hardest thing I’ve ever done!” kind of way, say a marathon. Around here we prefer the type three, torturous, “that was so fun, my legs feel like rubber!” type, and I suppose our trip to Shoshone Lake had all the elements of “fun” that we love. While it certainly was a challenge, the satisfaction of doing something difficult and getting a little fishing in while we were at it proved to make it one of our most memorable trips yet.

Backpacking as a family definitely has it’s challenges. Because this was our first experience backpacking more than a few miles with our entire family of six, plus Grandpa, we learned quite a bit along the way. Here are a few tricks we learned:

What tricks do you have up your sleeve when you take your little ones on adventures? I’d love to hear!