A few years ago I met a friend at the park. While our kids played, we chatted about life, about our crazy mornings with getting kids out the door, about the tantrum at the library and the embarrassing twenty minute serenade of Old McDonald in the stall of the Target bathroom. All those topics moms chat about when they get together. Then the conversation shifted. “I was just reading a study,” she started in, “about how the more children a married couple has, the more marital dissatisfaction they will experience. And three kids is where the greatest decline in happiness was seen.” Little did my friend know that we were expecting baby number three.

My husband and I recently celebrated eight years. I will always remember the first time he said the “L” word. It was evening and we had gone on a hike up a local canyon. At the top of the mountain he pulled out a blanket and his little pocket PC (years before ipods and ipads and smart phones and all those gadgets were invented) and we watched October Sky under the October sky. We could hear elk bugling and the stars were so bright. I was too terrified to say it back that night, but I thought it, and I couldn’t get it out of my mind.

I fell in love with my husband for so many reasons. It wasn’t just the fun, creative dates he thought up like our October sky or the fine china and oatmeal he brought along on a Saturday morning hike. Although they certainly helped. He was kind and thoughtful, he was fun and smart. He made me smile, and I wanted to be with him forever. 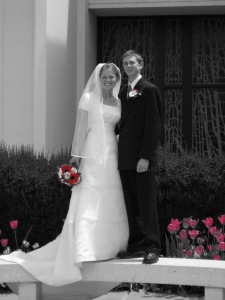 Fast forward eight years. After yet another night of our crazy whirlwind routine of nagging to get three roudy boys in PJ’s, reading some Dr Seuss, brushing teeth, making bathroom stops, prayers, back rubs, songs and kisses, I stood at the sink rinsing dishes. That man I married eight years prior stood next to me with a towel, drying each pot and pan. The glamor of that October Sky seemed so long ago. Those butterflies, that nervous feeling when he took my hand. Suddenly that conversation with the friend at the park years ago came flooding back to my mind. It hit me that in the eight years we have been married, I have been pregnant or nursing a baby for SEVEN of them (crazy, right??). That’s four anniversaries that have come and gone while I’ve sported a tummy the size of a watermelon. 120 accumulated pounds gained and lost (more or less). Holding my hair back as I sat on the tile floor in the bathroom waiting for the next wave of morning sickness to hit more times than he probably wants to remember. Six-and-a-half years of diapers. Two houses bought, one sold, four moves. Countless temper tantrums, many sleepless nights rocking a baby, definitely not enough Saturday mornings of sleeping in.

And three (almost four) of the most incredible miracles we have ever witnessed. And we witnessed them together.

And while we stood there sharing those pots and pans, recounting the funny things the kids said that day, our worries about M starting kindergarten, about work, about all that accompanies that mundane married life we share with our little boys, I realized my love for that man had changed. Three (almost four) kids and all that stress, chaos, and craziness it brings later, I wasn’t dissatisfied. I was filled. I was filled with awe at the father than man had become. I thought about how I fall in love again with my husband every day when I see him wrap his arms around our three little boys. When I hear them ask me, over and over and over and over again, “When is Dad gonna be home?” When he tickles them and wrestles them to the ground, when he hits them with pillows and elicits giggles as he chases them around the dining room table. When he gears them up with work gloves and somehow miraculously motivates three eager helpers to pull weeds around the house. When he talks in his best pirate voice and six blue eyes are fixated on the colorful illustrations on the pages in his lap. I fall in love again and again when I see him being a dad to the boys we get to share together. It’s an entirely different kind of love. Having children hasn’t wrecked our marriage, it’s made it so much more. I had no idea eight years ago that this is what I would be capable of feeling for that man I married. 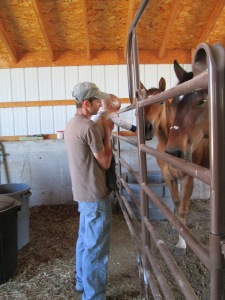 I realized that over the eight years we have shared as a married couple, I don’t love him like I did then. It just isn’t the same as it used to be. It’s no longer about two, it’s about SIX. It isn’t just about a husband and wife, it’s about a mom and dad. It’s seeing him, that man I fell in love with over eight years ago and promised to spend eternity with being a man far greater than I could have ever imagined. It’s waking up in the morning and feeling so grateful to be next to him, loving him, raising our boys. Together. And it is amazing. 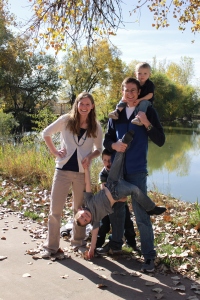 “Marriage is more than your love for each other. … In your love you see only your two selves in the world, but in marriage you are a link in the chain of the generations…” —Dietrich Bonhoeffer

← To Be Needed
The Things We Do For Our Kids →