When I Feel Weak

Posted on March 13, 2015 by catchingcrawfish

N, our two-year-old, burned his hand on our stove last week. I’d been fixing dinner early that day and he was being my little kitchen helper, mixing and measuring ingredients into the bowl at the table. The burner had been turned off only minutes before, and out of the corner of my eye I saw N pull the stool over. Everything was in slow motion as I dropped the knife I had been cutting with and rushed over to my little boy. It was too late. The palm of his hand had only rested on the hot burner for a millisecond before I grabbed him up, but the deed was done. Immediately under the running tap water blisters began to form. His tears dripped into the sink and pulled at my heart as I cursed myself for not getting to him sooner.

Later that day as he took a nap, I called my sister and cried. I spilled out my heart. I felt weak. I felt like I had failed him yet again. I was the adult, the one in charge, but I felt so inadequate, so lacking, so incredibly weak. His little hand bandaged in gauze, his sad cries played over and over in my mind. “Ouch! Hurt, Mommy. This hand, it hurt.”

Being a mom, being a parent, I’m convinced is one of the hardest jobs in the world. Not because of the late nights, not because of the endless dirty laundry. It really has absolutely nothing to do with the constant demands from little people still lacking patience or the dishes that pile high every night or the diapers that constantly need changed. When I became a mother I expected all of that. I knew full well what the job description entailed. What no one had warned me about, what makes it harder than anything else we do with our lives, is none of that. From the minute we found out we were expecting our first little boy I felt like my heart had been taken from me and would never be given back. I experienced emotions unlike I had ever felt before, from the most extreme joy to the most intense worry and pain. Their hurt is mine, more strong in my heart than any pain I have felt for myself. Their disappointment, their excitement, their successes and failures. Their happiness gives me gladness I never knew could be felt. THAT. That is what makes this job the hardest. Our emotions run in extremes and rest on these little ones.

On that particular day I felt weak. I hate feeling so weak. I wanted more than anything to take away his sadness, to put on a magic salve or give it a kiss and make it all go away. I felt like millions of mothers feel every day. So often we feel like we have to be strong, but we’re afraid there’s no strength to muster. We want to put on a brave face, tell them everything will be fine, but inside we’re scared too and want nothing more than to stroke their hair and take it all onto ourselves. It’s a hard job: wishing, hoping, loving, feeling and emotionally giving our all. Loving someone so intensely. 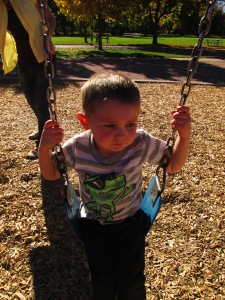 I’m so thankful for a Heavenly Father that knows the emotions I feel. He knows better than I do myself. He understands that complete joy, he sorrows in our sadness. Some days I feel so weak, like when my little two-year-old burns his hand on the stove. But I know with His divine help my weakness can become strong. I know because of Him, because of his love, I can pour out my soul to him and I can pick myself back up. Because of Him I can take on this tough job with strength. Because of Him I can hold my little boy in my arms and reassure him that everything will be okay. Because He is there for both of us, always, no matter what. I’m so thankful that I have been given the incredible responsibility to love and care for these little ones, and I’m thankful He will be by my side when I feel the emotional load of it all is weighing me down.

Because I’m human, because I’m a mother, I often feel weak. I often feel like I fall short. But I know that because of Him I can be filled with strength. And when you feel overwhelmed with the emotional load, I know you can too. He loves us. He will make up the difference.

← Protecting our Children
Beauty in EVERY Moment →

4 Comments on “When I Feel Weak”