Posted on April 16, 2014 by catchingcrawfish

Back in college my roommate and I were asked to go on a double date. The guys asking happened to be cousins and spent the entire night laughing about the most crazy and ridiculous things they’d done growing up. One story I remember from that night combined a parachute, a long rope, an old truck and a bunch of teenage boys…

The boys had found a parachute in pretty good condition at the local thrift store and thought “What the heck. We could have some fun with this!” They drove out to a long, straight, dirt road and tied the parachute to a 30 foot rope. My roommate’s date was the lucky guinea pig. They hooked him up using their trusty Boy Scout knots and revved the engine. Soon flying 20 feet above the ground, truck kicking up dirt, the teenage boys suddenly realized they hadn’t thought about how to get him down, and large trees and a curve in the road were looming ahead, and rather quickly.

This is just terrible. I’m so sorry to leave you hanging at the climax of the story, but I honestly can’t remember how it ended. My imagination and vague memory tells me it probably involved a broken arm, lots of scrapes, bruises and blood. Possibly a trip to the ER. What I do remember that night was how my roommate and I were dumbfounded that they were still around to tell their crazy tales. I clearly recall their response when we questioned, “Your poor mothers! Were they constantly a nervous wreck??” It was like the thought hadn’t even crossed their minds. Both had no sisters, only brothers, and it was clear that their reckless behavior landed them in the ER probably more times than their moms could count. They had become desensitized by their sons’ years of disregard for gravity, common sense, and safety. It didn’t even phase them!

After that date my roommate and I would tease that one of us would be the mom of all boys, dropping kids off at the hospital like it were weekly soccer practice. Eh, no big deal. Somehow I’d expected it to be her. I never had brothers. what on earth would I do with boys??

Well, eight years later, sure enough she has the darling girl in bows and frilly dresses and I have a house full of guys. Each time my husband and I have found out we’d be bringing home another baby boy, my mind immediately conjures up images of a 16-year-old tied to a parachute flying 20 feet above an old pickup speeding down some unknown dirt road.

Not too long ago I asked a friend, “Why is it that everywhere we go it seems like my boys are more reckless than any other kids??” In the most tactful way she could think of, she smiled and said, “Well my friend, maybe it could be because they are!” I suppose she makes a good point. Butterfly bandages are used as often as tissues at our house. Pulling splinters out of fingers has almost become part of our nightly ritual along with brushing teeth and reading stories. A goose egg is the look at least one of my boys is sporting most days.

Never in my dreams did I think that I would carry the stigma of being the “all boy mom.” So often life doesn’t go exactly as we have pictured. God seems to frequently send us down an entirely different path to explore than we’d ever even considered. I’m ashamed to admit that when we sat in the ultrasound room for our third little one and the doctor exclaimed, “Looks like another boy for you!” I cried, and they weren’t exactly tears of joy. But two years later I can’t imagine my life without that audacious little bundle of wildness. Nor without the other two. God sent me three boys. Not what I expected (I have no faith in my motherly intuition any more!), but just what God knew I needed. As the years have passed the reality that frilly dresses and bows might not be where life takes me has begun to sink in. I absolutely LOVE being a mom to all boys, but sometimes I still wonder about that little girl and hope that opportunity will be mine. And maybe that will mean years down the road as a grandma when I can spoil her and afford all the girly accessories. In the meantime I’ll keep trying to adjust to the constant bumps and bruises. The endless tussling, the never-ending dinosaur battles, the tripping over Lego towers. I’ll work on perfecting my construction vehicle knowledge, my pirate lingo, and being the most vile villain so my superheroes can save the day again and again. In the meantime I’ll do my best to raise three impetuous, crazy, wonderful, chivalrous boys so that they can be worthy of a sweet girl who, like their mother, loves them in spite of their quarky boyishness. Sometimes even because of it. 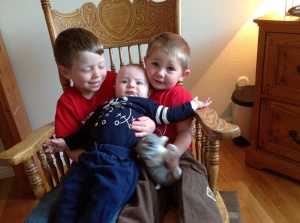 And maybe, just maybe, when they’re teenagers I won’t be phased by the ridiculous things they do (but don’t be betting money on that!). 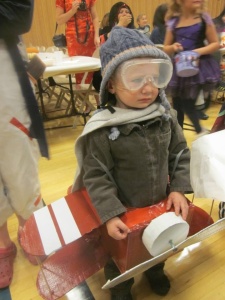 6 Comments on “Slugs and Snails and Puppy Dog Tails…”

Hi! I'm Chelsi. I'm so glad you're here to share in our adventures!