Posted on April 11, 2014 by catchingcrawfish

We usually don’t make a huge deal of birthdays. A cake, family, maybe a couple presents, nothing big. So when my birthday came on one particular year, I hadn’t expected much. I certainly hadn’t expected to celebrate at my husband’s bedside in the ER.

The real story actually begins years before, right after we got married. My husband had taken a sailing class in college and had fallen in love with it all. Getting a sail boat was constantly on his mind, like a thorn in his side that wouldn’t go away until he felt that water spraying his face. The problem was that we were poor college students and had no time. When we graduated, moved, and started making some money, the problem was no place to keep a sail boat. When we bought our first home, I insisted that before he took the plunge, I needed a car to drive (we had one car that he took to work, meaning I walked EVERYWHERE). Finally I ran out of excuses and he was able to fill his dream. He searched and searched and in early November ( well past sailing season) he found his “second love.” It was small, yellow, and old. Perfect in every way for his sailor’s heart. 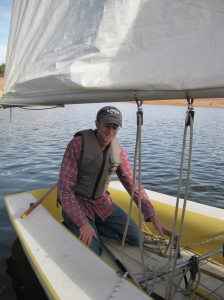 We soon found that November was an awful time to buy a boat. Besides one daring sail in early December, it sat in our driveway teasing and taunting him every time he left for work. It called to him as he pulled in at night. He was in torment waiting those long, winter months for his chance at that maiden spring voyage.

Mid-march can hardly be considered dead of winter, but it’s not exactly spring, let alone summer, either. Despite my worry, he decided it was finally time. Anything I said couldn’t dissuade this anxious sailor. The water was beckoning him. My family was in town visiting for my birthday. We’d planned to have a little picnic at the lake (despite the chilly spring breeze) where my husband and brother-in-law would take our little yellow boat out. They left early that morning, long before the rest of us were up and about. My husband was like a little boy, giddy with anticipation even while scraping frost from the hull before they launched. My awesome brother-in-law was a good sport to go along with his antics. We followed a couple hours behind with food and kids in tow. I have to admit it was exciting to see the white sails and the little boat skimming across the water at the end of the lake as we pulled up. The breeze was just right, and the day, though a bit chilly, was proving to be a beautiful one.

We stood and watched, admiring the smooth jibes and tacks for maybe fifteen minutes, then out of nowhere came a giant gust of wind. We stood frozen, horrified as the little boat toppled to one side, the sails dipping into the water. “Oh no. They’re going in!” Grandpa shouted. It seemed like slow motion as we watched the contents of the boat dump into the lake and the mast disappear. Climbing up on the hull and rocking on the keel, they were able to flip the boat back over. It wasn’t more than a minute later that another gust came. Soaked and exhausted, we watched as they manoeuvred the boat back up for a second time. The third followed just seconds later. At this point all of us on shore were feeling a little panicked. No other boats appeared to be out (who in their right mind goes sailing on a cold, gusty, march morning?), and the rangers were nowhere to be found. My husband and brother-in-law, far from the dock, were hanging onto the centreboard and clinging to the mast. Half of their bodies were dangling in the freezing water, obviously well out of much-needed energy to right the boat for a third time. We were clueless as to what we should do, but something needed to be done, and fast.

Right at that pivotal moment a fishing boat came out of nowhere. It must have been hiding at the other end of the lake, because as far as we could tell my husband and brother-in-law had been the lone sailors that morning. Pulling up next to them, the fishermen grabbed hold to their numb arms and dragged them aboard their little boat. The men carefully tied a rope onto the forward pulpit under the water and slowly motored to the dock. Relief would be an understatement as to how we all felt. My sister and I rushed home to get blankets. We knew they would desperately need something, and we had nothing. We collected as many as we could find and were rushing back toward the lake when my phone rang. It was my mom. “They’re headed to the hospital. They couldn’t walk or even feel their legs. When we tried to talk to them they were acting, I don’t know, delusional. Grandpa is driving them to the emergency room right now.” I almost felt sick. “I TOLD him I’d thought it was a bad idea! I knew something like this would happen. Couldn’t he just listen ONCE?!” I admit, I was a little mad, and so was my sister. Then R, only 2 at the time, came on the phone. “Mommy?” His little voice was shaky and scared. “Daddy and Uncle A fell in the water! They go to the hos-tibal. Daddy at the hos-tibal, mommy! Daddy gonna be ok?” A chunk welled up in my throat. “Yes, he’s going to be ok. We’re almost there, R. We’ll get you and we’ll go check on Daddy.”

The ER is not the most exciting place to spend your birthday. It was cold, sterile, and depressing as we walked through the halls to where our sailors lay being treated for hypothermia. I couldn’t decide whether to be angry or sympathetic when the nurse showed me into his room. Whether to slug his arm or give him a hug. At the last minute my sympathetic side won over. He looked so pathetic wrapped in all those blankets and IVs running through his arms. For 3 hours we waited for their temperatures to rise, and finally we were able to go home.

All of us have recounted that spring maiden voyage time and time again, recalling the life lessons that birthday “celebration” taught us. Be prepared. Listen to your wife (one of my favorites 🙂 ). Be patient. Be wise. Forgive always. Don’t take out a new sail boat as a novice sailor without wet suits on a cold day in March. With your brother-in-law. On your wife’s birthday. Ever again.

Out of all the lessons we learned, probably one of the biggest was taught by the fishermen. Out of nowhere they crossed the entire lake to save two goofy guys. They had no idea what the situation was, how bad the sailors were in need, or if anyone else would come along. They stopped their fishing, were perceptive enough to see that my family was in danger, and didn’t wait for another person to step in. What if they’d hesitated? What if they’d decided it was the ranger’s job to save that boat? What if…? That day they were heroes. That day they saved two lives. That day they taught all of us the importance of helping others. Not when it’s easy, not when it’s convenient, even when it’s someone else’s responsibility.

We may not need to rush to the aid of a sinking boat, but we often need to give someone a hand. We often need to open a door, offer a smile, make a call, do an extra job, or send a note. And often it isn’t our responsibility. But ours or not, it needs to be done, and what better person than you? If you don’t, then it’s possible no one else will. Two lives could have been lost that day in that cold, spring water. But because of two fishermen who took the time to notice and to act, my two-year-old boy was comforted by his daddy’s warm arms in the “hos-tibal.” One of the best birthday presents a mother could ask for.

← The Green-Eyed Monster
Slugs and Snails and Puppy Dog Tails… →